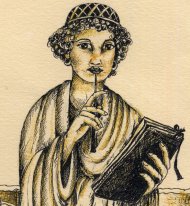 Comparative and Superlative Forms of Adjectives and Adverbs

Positive is derived from pono, ponere, posui, positum 3 “place” (i.e. the positive is “set up” as the basic degree), comparative from comparo 1, “compare”, superlative from superlatum, the fourth principal part of superfero, meaning literally “carried above” (i.e. superior to all others).

Inflection is not the only way to express comparison. As well as the particular comparative form of the adjective, English uses the comparative adverb “more” in combination with the positive form of the adjective; i.e. not only “My pig is lovelier than your pig” but also “My pig is more beautiful than your pig”. Latin makes just the same use of magis, the comparative adverb of magnus; i.e. not only porcus meus tuo pulchrior est but also porcus meus tuo magis pulcher est.

Similarly, Latin can express “The pig is very beautiful” not only with specifically superlative form of the adjective (i.e. pulcherrimus est porcus) but also with a combination of the positive form with valde “very” (the slightly irregular positive adverb of validus, -a, -um “strong”) (i.e. valde pulcher est porcus). The inflected forms and the constructions with magis and valde are generally interchangeable, but only the inflected forms, which are more complex and hence need more attention, will be used in the exercises in this course.

magis and valde are almost obligatory when the stem of the adjective ends in i; for example, piior is not found as the comparative of pius, -a, -um “pious”, and Cicero criticized Mark Antony for using piissimus, claiming that it was not a Latin word. (The emperor Augustus’ teacher is said to have found piissimus in a letter by Cicero; Antony had Cicero decapitated in the proscriptions of the Second Triumvirate in 43 BC.) The contracted form pissimus is found occasionally in inscriptions. magis was to have an interesting future, changing its sense from “more” to “but rather”, then to simply “but”, as in Italian ma, Spanish and Portuguese mas and French mais.

“-er” and “–est” are losing ground to “more –” and “most –”, but English has less interchangeability than Latin in expressing comparative and superlative: with many adjectives, particularly those of three or more syllables, it is not possible to use the suffix -er or -est, e.g. “beautifuler”, “meticulousest”. Even when a form is seems theoretically correct, we might hesitate to use it: does “stubborner” seem less acceptable than “stubbornest”?

The abl. sing. of all comparative adjectives ends in -e; the ending in -i is rare in both classical and late Latin texts, and should be avoided. Do not be misled by such phrases in modern use as a fortiori, a posteriori and a priori; the first attested occurrence of any of these phrases in an English text, from 1606, is the regularly spelled a fortiore.

It is not clear why the adjectives facilis, difficilis, gracilis, humilis, similis and dissimilis should form this distinct group, since many other adjectives in -ilis decline throughout on the model of dulcis; for example, agilis “agile”, fertilis “fertile”, mobilis “mobile”, nobilis “noble”, utilis “useful”.

Whereas prope is an adverb and also a preposition taking the accusative, the adjectives propior and proximus are normally constructed with the dative; e.g. lupus flumini propior est “The wolf is nearer to the river”, Sicilia Italiae proxima est “Sicily is very near to Italy”.

Plus is used mostly in the nominative and accusative, and the dative singular is particularly rare. For further discussion of the partitive use of the genitive, as in duo milia vaccarum, see Chapter 16.

It would be incorrect to translate “I give food to my pig (which is) bigger than a hippo” as porco meo maiori hippopotamo (i.e. abl. of comparison) cibum do, since the first comparandum, porco, is in the dative. The natural syntax of the language, however, dictates that the great majority of such comparisons involve the subject or direct object of a clause. It is fairly rare, therefore, that the ablative of comparison should not be available as an alternative to the construction with quam.

The greatest concatenation of comparative adjectives comes in Polyphemus’ love-song to the sea-nymph Galatea at Ovid, Metamorphoses 13.789ff. (read in the Audio files). It presents the Cyclops in a very different light from his grim cannibalistic role in the Odyssey and is comically overdone, piling up twenty-six comparative adjectives, all fem. voc. sing., and thirty-one ablatives of comparison (but no instances of the quam-construction).

Adverbs are a very heterogeneous word-class in Latin, as in most languages. The Stoics’ term for “adverb” was πανδέκτης (pandektes) “all-receiver” (compare πανδέκτηρ [pandecter], a dish with many ingredients), perhaps reflecting the miscellaneous origin of this part of speech as well as its wide range of functions. It is not clear that adverbs existed in Proto-IndoEuropean as a separate grammatical class. In Latin, as in other IndoEuropean languages, they are often fossilized case forms of nouns and adjectives.

Most adverbs derived from adjectives have comparative and superlative forms; e.g. care, carius, carissime. Only a small proportion of adverbs not so derived have such forms. In many cases, the meaning restricts the adverb to the positive form; there is little demand for a comparative form of partim “partly” or of hic “here” or of hodie “today”, or for a superlative form of verbatim “word for word” or of forte “by chance” or of semper “always”. It is not, however, obvious why some abverbs have comparative and superlative forms, while many others which might reasonably have such forms do not. Why, for example, should prope “nearby” have the comparative propius and the superlative proxime, whereas procul “far away” has no equivalents? Why should olim “at some time”, but usually with reference to the past, i.e. “long ago”, have only a positive form, whereas nuper “recently” has a superlative, nuperrime (but not a comparative).

Other adverbs with all three degrees are diu, diutius, diutissime (“for a long time”; diuius and diuissime would be hard to pronounce) and saepe, saepius, saepissime (“often”). saepe was originally a neuter accusative singular adjective used as an adverb (like e.g. facile, multum). The adjective saepis, saepe “packed” (cf. saepes, saepis fem. 3 “hedge”) had, however, fallen out of use in pre-literate times.

Grammarians recognized that the adverb from facilis was originally faciliter, but Quintilian cites that as an example of pedantry (Education of the Orator 1.6.17). Vitruvius is almost alone in persisting with faciliter; in his On Architecture, hardly a triumph of elegant Latin prose style, he has it eighteen times, but never the adverbial facile. The adverbial form of difficilis in most frequent use is neither difficile nor difficiliter, but the irregular difficulter.

The sense of the adjectives from which they are derived indicates a difference between magnopere and multum; the former refers to quality, the latter to quantity. In practice, however, there is little distinction; for example, uxorem multum amo and uxorem magnopere amo both mean “I love my wife greatly”.

prīmō and prīmum are subtly different in sense. prīmō means “at first”, implying a contrast with a later event, state or condition; for example prīmō Caesarem amābat Brūtus (At first Brutus loved Caesar, but later he killed him). prīmum means “for the first time”, implying a contrast with a previous event, state or condition; for example Caesar hostis reī publicae tum prīmum erat (Caesar was an enemy to the state first when he crossed the Rubicon). This distinction is not always maintained.

It is almost impossible to use statim in dactylic verse, and hence that normal word for “immediately” is excluded from over ninety percent of Latin poetry. Horace could admit statim to the lyric meters of his Odes, but Vergil and Ovid had to resort to the archaic synomym extemplo, or to the not quite synonymous subito “suddenly”, or to periphrases such as nec mora (“nor [was there] a delay”).

Likewise, it is impossible to use the word hippopotamus in dactylic verse, for it must have at least three consecutive short syllables. The only reference to hippos in Latin poetry is achieved by periphrasis: speaking of a spectacle put on by Nero, a shepherd says aequoreos ego cum certantibus ursis/spectavi vitulos et equorum nomine dictum,/sed deforme pecus, quod in illo nascitur amne/qui sata riparum vernantibus irrigat undis “I watched sea-calves (i.e. seals) with bears fighting with them, and a herd of creatures called by the name of horses, but ugly, that are born in that river which irrigates the crops sown on its banks with its waves in the spring” (Calpurnius Siculus, Eclogues 7.65-68). At Book 26.236f. of his Dionysiaca (the longest poem in Greek [48 books]), Nonnus manages to refer to a hippopotamus by reversing the order of the two elements in the compound: κεῖθι μελαμψήφιδα διαξύων ῥόον ὁπλῇ/νήχεται ὑδατόεις ποταμήιος ἵππος ἀλήτης (A watery, wandering, riverine horse swims there, scraping the black-pebbled stream with its hoof).

Given that e.g. carius is the nominative (and vocative) as well as the accusative form of the neuter singular comparative adjective, it is reasonable to ask why specifically the accusative should be said be the adverbial form. In practice it makes no difference, but the accusative is indicated by the more obvious origin of adverbs in -im; such adverbs seem to be formed on the analogy of the adverbial use of the archaic accusative singular noun-form.

forte is the ablative of fors, fortis fem. 3 “chance”, sponte the ablative of (spons) spontis fem. 3 “will” (found almost exclusively in the form sponte), primo and vero are ablative neuter adjectives, and magnopere (= magno opere) is an ablative phrase serving as the positive adverb of the adjective magnus.

The standard Romance adverbial suffix -ment(e) is derived from just such an ablative phrase, comprising an adjective in agreement with mente “with … mind” (from mens, mentis fem. 3); for example, tacita mente (“with silent mind”) and severa mente (“with strict mind”) developed into tacitamente and severamente in Spanish and Italian, tacitement and sévèrement in French. This derivation not only accounts for the feminine a in such adverbs in Spanish and Italian, and the feminine e in French, but also gives an insight into Spanish adverbial combinations of the type tacita y severamente “silently and strictly” [= “with silent and strict mind”]. Such was the popularity of mente in forming adverbs that it was suffixed even to words which are already adverbial in both form and sense; hence the splendid paulatinamente “gradually” (Latin paulatim).

English often uses “here”/”there”/”where” for “to here”/”to there”/”to where”, but the distinction is always clearly made in Latin; contrast Caesar hic cras erit “Caesar will be here tomorrow” with Caesar huc cras veniet “Caesar will come (to) here tomorrow”. The old forms “hither”, “thither”, and “whither” (also “hence”, “thence”, and “whence”) made the distinction.

ubi, quo, and unde function both as interrogative pronouns/adverbs and as adverbs of place; contrast ubi est Caesar? “Where is Caesar?” and silva, ubi habitant lupi, locus nigerrimus est “The wood, where the wolves live, is a very dark place”.